Author Roy “Griff” Griffis on Your Book Your Brand Your Business

Please tune in at 5 PM Eastern on May 14 when I welcome the accomplished author Roy “Griff” Griffis to the show. In his own words:

I was born in Texas City, TX, the son of a career Air Force meteorologist. Attended a variety of schools at all of the hot spots of the nation, such as Abilene, Texas and Bellevue, Nebraska.

When I was ten, I was sent to my grandparent’s house in Tucson, Arizona because things were tough at home. I was pretty damn lost, as my grandparents were largely strangers to me. My older brother, a more taciturn type, refused to discuss what was going on. Fortunately, like so many kids before me, I was rescued by literature. Or, at least, by fiction. In a tiny used bookstore that was just one block up from a dirt road, I discovered that some good soul had unloaded his entire collection of Edgar Rice Burroughs’ “John Carter of Mars” series in Ballantine Paperback. Because my father had already taught me the guy who created “Tarzan” was the self-same ERB, I spent my RC Cola money on the first book of the series, “A Princess of Mars.” 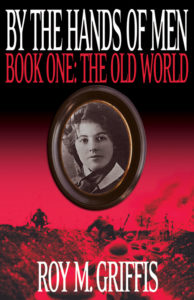 I think what struck me was how these books were possessed of magic: they were able to transport me far from this dusty land of relatives who I didn’t know and other relatives pretended not to know me to another dusty land of adventure, heroism, nobility, and even love. It was the first magic I’d encountered that wasn’t a patent fraud, and when I closed the stiff paperback with the lurid colors on the cover, I decided it was the kind of magic I wanted to dedicate the rest of my life to mastering. And, thus, I was saved.

Since then, I’ve never looked back. I’ve written poems, short stories (twice runner-up in the Playboy college fiction contest), plays (winning some regional awards back East and a collegiate Historical Playwriting Award), screenplays, and novels. I’m a member of the WGAw, with one unproduced screenplay sold to Fox Television. I also had a moment or two of internet notoriety as co-creator of the web-comic “Truesbury.” Right before Trump’s election, I somehow was selected as a “Conservative Novelist” to be interviewed by a Swiss newspaper, which was pretty funny by itself since they found me by doing an internet search for Conservative Novelists and for some reason, I was about number three on the list. “We had a hard time finding conservative novelists.” No shit, I thought.

Along the way, I’ve done the usual starving artist jobs. Been a janitor, a waiter, a clerk in a bookstore. I was also the 61st Aviation Rescue Swimmer in the Coast Guard (all that Tarzan reading wasn’t wasted). I’m also not a bad cook, come to think of it.

Currently, I’m a husband, father, and cat-owner. I’m an avid bicyclist and former EMT. I live in a small town in Texas with my lovely wife (a college professor) where we are renovating a 130 year-old historic home for us, three rescue dogs, and two rescue cats. My friends call me “Griff,” my parents call me “Roy,”and my college-age son calls me “Dadman.” It’s a good life.

During the live interview, Griff and I  welcome your questions from the chat room.