I invite you to join me as I welcome Julia Cameron to The Nancy Ferrari Show airing live on W4CY Radio AND KDHD Radio on Tuesday, September 2nd, 10:00 am PT/1:00 pm ET. 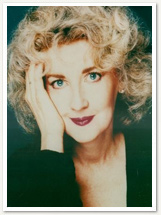 Julia Cameron has had a remarkable career, which in turn has given remarkable help to others. Herself an award-winning poet, playwright, and filmmaker, she has written thirty books, ranging from her widely-praised, hard-hitting crime novel The Dark Room to her volumes of children’s poems and prayers.

Despite her extensive film and theater credits, which include such diverse work as Miami Vice and the prize-winning romantic comedy God’s Will, which she both wrote and directed, Cameron is best known for her hugely successful works on creativity.

The Artist’s Way has sold more than four million copies worldwide, and her followup bestsellers Finding Water, The Vein of Gold, Walking in this World and The Right to Write are likewise flagship books which are taught in universities, churches, human potential centers and even in tiny clusters deep in the jungles of Panama.

Credited with founding a new human potential movement that has enabled millions to realize their creative dreams, Cameron eschews the title creativity expert, preferring instead to describe herself simply as an artist. “Artists have always mentored, I just do it on a wider scale.”

“My books are not creative theory,” she explains. “They spring straight out of my own creative practice. In a sense, I am the floor sample of my own tool kit. When we are unblocked we can have remarkable and diverse adventures.”

She knows of what she speaks. A writer since the age of eighteen, Cameron has published highly praised short stories, award-winning essays and hard-hitting political journalism. Her credits range from Rolling Stone to The New York Times. As a teacher, she has taught everywhere from The Smithsonian to Esalen, The New York Times to Northwestern University, where she served as writer in residence in film.

Most of us have no idea of our real creative height. We are much more gifted than we know. My tools help to nurture those gifts.

As a filmmaker, she collaborated with former husband Martin Scorsese on “three films and one daughter, Domenica.” As a playwright, her work has graced such prestigious stages as Princeton’s McCarter Theater, The Denver Center of the Performing Arts and the tiny Taos Community Auditorium in her hometown. It was there that she first workshopped her musical “Avalon,” under the guidance of legendary director John Newland. On her musicals, Cameron serves as composer as well as libretto-writer and lyricist. This musical aspect of her career began in her mid-forties and she laughs, “I have only myself to blame for suddenly sprouting a new career. If you teach unblocking, you do get unblocked!” Championed by such people as Washington Post music critic Joseph McClellan who cites her “enormous gift for melody,” Cameron explains, “Most of us have no idea of our real creative height. We are much more gifted than we know. My tools help to nurture those gifts.”

Citing creativity as an authentic spiritual path, Cameron’s work has been embraced by such diverse spiritual groups as Buddhists, Sufis, Roman Catholics, Church of Religious Science, and Unity with “quite a few British Wiccans thrown in.” Her three affirmative prayer books, Heartsteps, Blessings, and Transitions, are widely used, beloved for both their optimism and their pragmatism. Her most recent prayer book is both soothing and inspirational. Titled Answered Prayers, it helps to lift our perspective to a “God’s-eye view.” For those who desire it, all four prayer books are gathered under one cover in the collection Prayers to the Great Creator.

Hoping to inspire others to “simply start,” Cameron has penned two “into-the-water” books: The Right to Write and The Sound of Paper. Gentle, but powerfully catalytic, these works serve both as introduction and reminder of the power of creative living.

Cameron turns her  storyteller’s eye to Hollywood and her years in “the business” in her story collection Popcorn: Hollywood Stories, which led Erica Jong to call her “The Real Animal.”

Cameron recently published the long-awaited sequel to The Artist’s Way. Entitled The Complete Artist’s Way, it is a trilogy containing “further adventures along the trail” with Walking in This World: The Practical Art of Creativity and Finding Water: The Art of Perseverance serving as extensions to Cameron’s original work. Cameron also recently published her memoir, Floor Sample.

“I wanted to step out from the role as teacher and mentor, and give a detailed picture of my creative life as it has unfolded.”

That creative life has included many adventures. Most recently, Cameron has enjoyed the production of a musical, “The Medium at Large,” on which she collaborated with colleague Emma Lively.

Cameron’s play in letters, “Love in the DMZ, a Vietnam love story,” was awarded “Best Original Drama”  in Los Angeles.

Cameron recently published a romantic novel entitled Mozart’s Ghost. In it, creative ideas are the stuff of everyday magic.